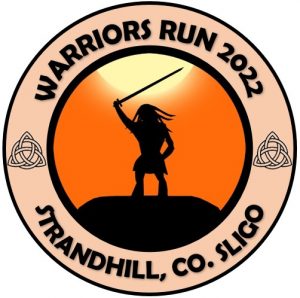 History of the Warriors Run 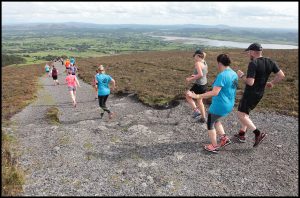 The inaugural Sligo mid-summer festival was held on the weekend of 14th – 16th June 1985 and was the catalyst for a number of “firsts”. It was the first time a co-ordinated music festival was staged in Sligo Town and it was also the impetus for the staging the first Sligo Triathalon on the Sunday of that weekend. But another event was staged on the evening of Friday 14th June to be the launch pad for the weekend’s activities. It was a road and hill running race, one of the first of it’s kind in Ireland, and it took its 160 competitors from the Beachfront in Strandhill to the top of Knocknarea mountain to finish at the megalithic cairn known as Queen Maeve’s Grave.

Maeve, the fiery Queen of Connaught, is reputed in legend to rest on top of Knocknarea. Her battles with the King of Ulster over the brown bull of Cooley are well documented. In each, references to Maeve’s brave Warriors are made and were even praised by the Queen herself. After Maeve was assassinated by a nephew of the Ulster King she was brought back by her Warriors to the top of Knocknarea and was buried, standing upright facing the eastern sunrise. And so the initial race to her final resting place from the Atlantic seashore was aptly named The Warriors Run.

But the idea for this event itself stemmed from a number of origins. Strandhill is no stranger to road racing. From 1921 until the mid 20’s a marathon race started from the Cannon Gun in Strandhill to just outside Gurteen, Co. Sligo. This race, just over 26 miles was known as the Morren Marathon and drew quite a number of competitors in its day.

In 1979 a group of locals were sitting in The Strandhill Bar (belonging to the late Sonny Bree R.I.P.). The bar boasts an excellent view of Knocknarea from its back window and they were discussing the best paths to climb to the top of the mountain from the front. A wager started as to which path was the fastest, the quickest time mentioned was 45mins. 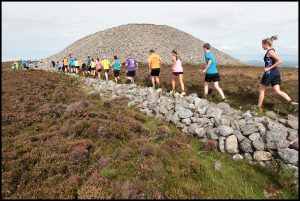 A visiting German tourist who overheard the conversation got into the wager stating his son could climb the front of the mountain in half that time. With all deals done his son, a 17 year old member of a scouting troop, took off over the wall at the back of the pub and started to negotiate, bog, ditches, forestry and cliffs. Witnessed by those in the bar who could follow the majority of his journey he made it to the top (approx 1000 ft) in 19 minutes!

And so as Strandhill is steeped in legend, mythology and history, it was combination of all of the above ideas and imagery that were amalgamated in 1985 to produce the first Warriors Run. The initial races finished on top of Knocknarea at the Cairn but in order to facilitate the request of the runners themselves and improve on the race from a spectators point of view, it was extended to return to the beachfront again.

And so the Warriors Run was born and has been staged each year since then. It, and the subsequent progression into the Warriors Festival, has now become synonymous with Strandhill and it’s popularity has grown to such an extent that each year runners from around Ireland and the world vie to gain a place in the limited race field. In 2004, the Warriors Festival Commmitee decided to honour two of those original founding members. The Tom Staunton & Pat Curley perpetual trophies are now presented to the first male and female local runners to cross the finish line and will be presented again this year.

We hope you can come visit us and bask in the hospitality that Strandhill has to offer.

Registration will open on 8th April for the 36th Warriors Run

We welcome volunteer Warriors for our event. Please contact us for more details.